When Norway’s largest newspaper Aftenposten sent three young fashion bloggers to Phnom Penh to work for a month at a clothing factory, they came back transformed. One of the teens, a 17-year-old fashion blogger named Anniken Jørgensen, is now criticizing fast fashion chain H&M for not paying higher wages. She is also blasting Aftenposten for not showing more footage of the poor working conditions at the factory they visited. And the Asian garment industry is now under debate in the Norwegian parliament, according to the director of the series, which has been viewed more than 1.5 million times.

In the reality series, called “Sweatshop Deadly Fashion,” the teenagers initially display flippant curiosity. Early on, Jørgensen asked, referring to the workers, “How many do you think die each year?” Another participant ventured that workers must be “used to” their harsh lives. By the end, they were holding tear-filled one-on-one interviews with the workers and railing against the fashion companies that they themselves have frequented. Twenty-year-old participant Ludvig Hambro said at the end of the series: “The truth is that we are rich because they are poor. We are rich because it costs us €10 ($11.20) to buy a t-shirt at H&M.”

As Quartz has reported, Cambodia was once seen as a model for other textile producing countries, but worsening safety standards and flat wages prompted widespread protests last year. The government eventually raised the minimum wage from $80 a month to $128, but only after police shot and killed five workers. That wage is still lower than the $160 protesters had originally demanded. May Sopheaktra, president of the Cambodian Alliance of Trade Unions, told Voice of America that union members are still being fired from their jobs.

H&M said in a statement to Aftenposten in response to the show, “This program is not representative in relation to H&M’s social responsibility and the comments give a wrong picture of the work we do around the working and salary conditions at our contractors.” You can watch the entire series, subtitled in English, on Aftenposten’s website.

See all episodes in English here: 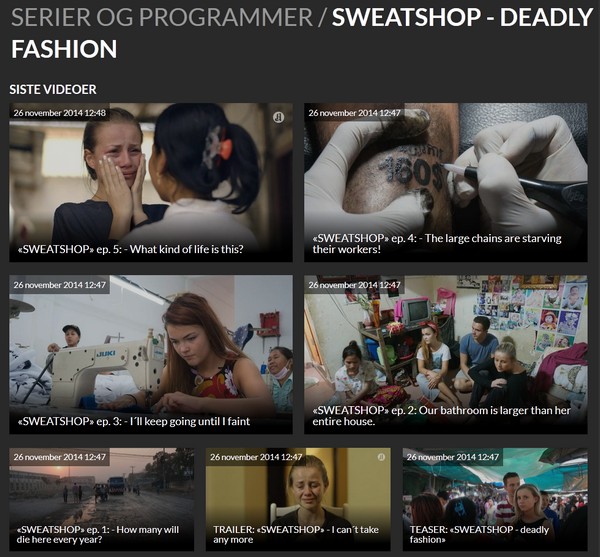